Accessibility links
The New Sounds Of Protest And Hope As demonstrations for racial equality continue across the U.S. and the world, artists have been shaping and sharing their grief, fury, resolve and vision for the future.

The New Sounds Of Protest And Hope

The New Sounds Of Protest And Hope 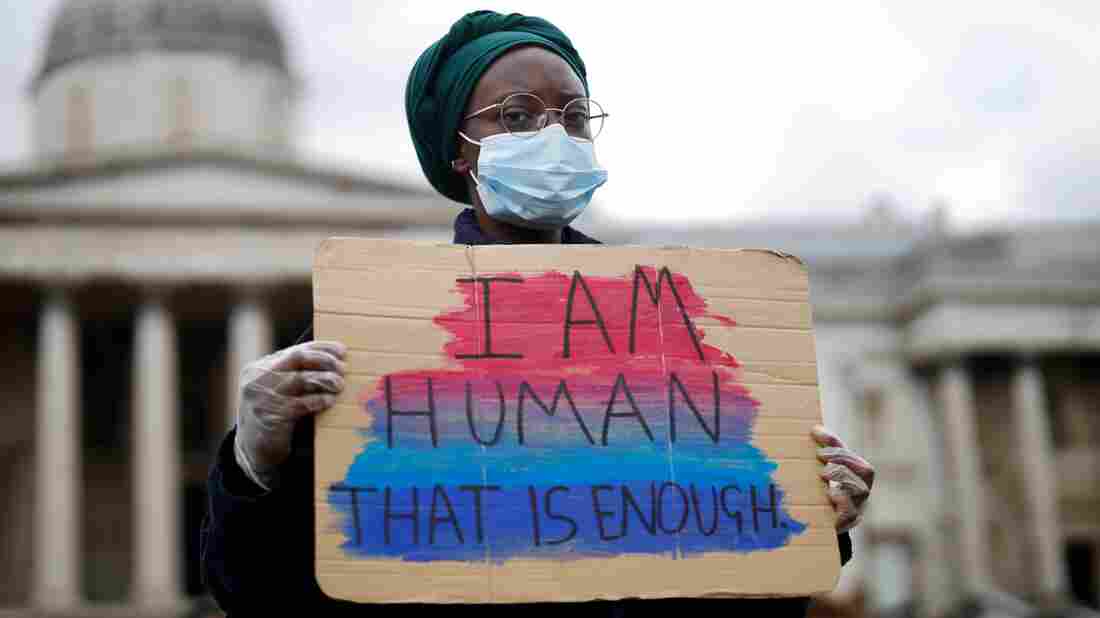 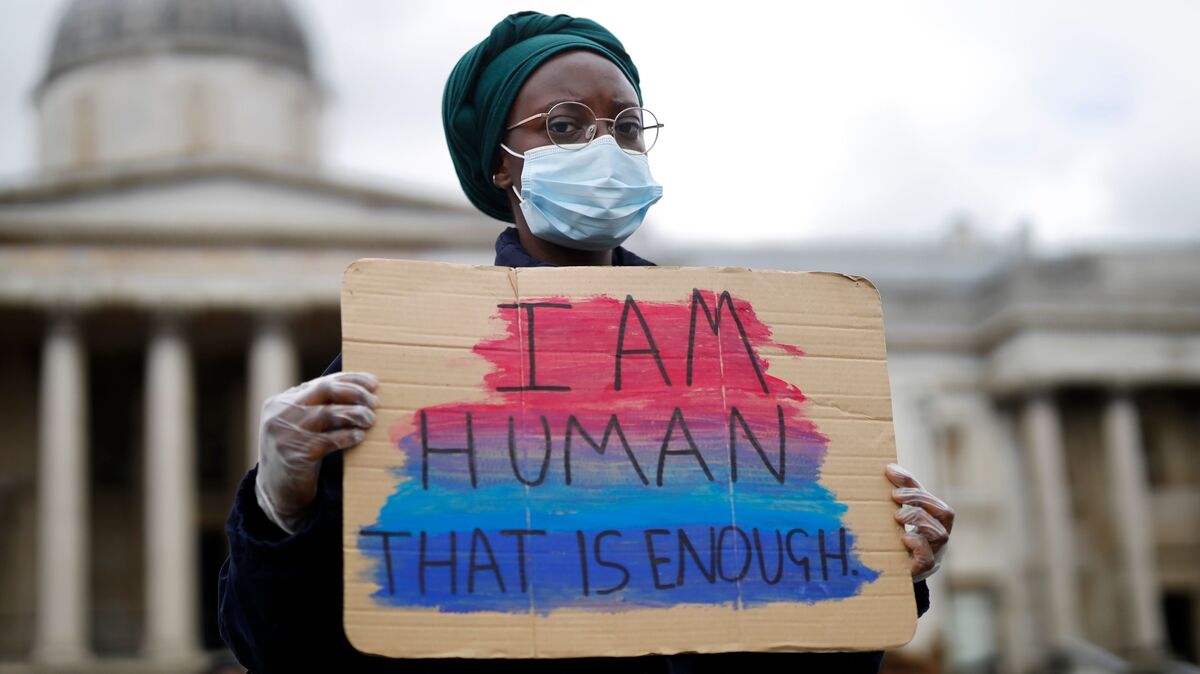 A protester photographed in Trafalgar Square in central London on June 5, 2020.

As technology evolves, so does protest. Awareness of George Floyd's killing at the hands of Minneapolis police officers could only inspire an international grassroots movement because a teenager, Darnella Frazier, decided to record his arrest using her phone and post it to social media. Activists are organizing marches and rallies on Twitter and Instagram, even as they warn participants to be careful of surveillance on those platforms. And the protests have continued, at least in part, because people are documenting beatings, the use of tear gas and other actions by enforcers in real time, sharing the growing movement's message that police brutality is its own pandemic that must be consistently tracked and contained.

The music of protest is also changing, with technology as the main agent. Community building and mutual aid take place through mobile devices and headphones as protesters keep moving and some attempt to maintain social distance. Users on TikTok have resurrected Childish Gambino's 2018 hit "This is America" as a meme-driven anthem. Dancers from Puerto Rico to New York and beyond are claiming spaces the size of a million phone screens. Beyond the rallies, stars are sharing everything from heartfelt improvised verses (here's one from LL Cool J) to incendiary singles (YG's "FTP") on Instagram, Bandcamp and YouTube, or throwing away long-considered marketing plans to get urgent missives to listeners now. Longtime collaborators have sent verses through cyberspace to make songs, like Terrace Martin's "Pig Feet," that will surely make 2020 year-end lists.

Perhaps more importantly, as popular music seeks to relocate its wellsprings, artists are creating their own anthems, many raw and deeply uncompromising, and sharing them as soon as their hearts, minds and voices generate them. Some efforts, like the plaintive song of 12-year-old Keedron Bryant and the solo rendition of "America the Beautiful" by clarinetist Anthony McGill, have reached large audiences. Others serve smaller communities. All show how the hierarchies of political organizing, and of popular music, are shifting.

Below is a partial record of music released in the past week answering this historic moment. In another week, this list will likely be doubled, tripled. In recent years, the question is protest music still relevant has been raised in many public conversations. After this week, may it never again be asked.

Kimya Dawson, "At the Seams"

Revisiting a song she wrote for the #BlackLivesMatter movement and released in 2015, the Pacific Northwest's inimitable singer-songwriter shows, in an a capella performance that she struggles to complete, all the pain one person can bear. Three-and-a-half minutes in, she pauses to add "Minneapolis" to the list of sites of violence against black Americans. Those few seconds contain a world of grief.

A master pop craftsman, Bellinger turns the slow jam into a site for introspection in this plaintive cry for simple respect. A blues for the hip-hop age.

The voices in this song belong to two inmates at New Folsom Prison; lyricist Bruce "Sincere" Dixon, who at 38 is now 21 years into a 25-to-life sentence, reflects on the system that confines him, while letting the killers of Oscar Grant and Eric Garner walk free. Supporting Dixon, Alex "Baby Shell Dogg" Batriz beatboxes a dirge. This song is part of the remarkable Prison Music Project founded by activist and artist Zoë Boekbinder, celebrating the release of the album Long Time Gone, a collaborative effort among incarcerated poets, rappers and songwriters and Boekbinder's New Orleans-grounded community of musicians, including co-producer Ani DiFranco.

Framed by a sampled declaration of self-defense from a woman as police enter her home – "You're violating my right!" — this eerie soul ballad by Minneapolis visionary Dua Saleh evokes the simmering fury of those repeatedly forced to defend their right to occupy space, even those deemed private.

The Farris brothers – rapper D Smoke and the smooth singer SIR – look to their roots in a gospel-grounded family in this contemplative, passionate testimony to the grit and valor of young people surviving two pandemics, coronavirus and racism, at once.

A minute-and-a-half of attitude from the producer who turned Cardi B's "coronavirus" outburst into a phenomenon, this song and its accompanying video remind us that people can cope and thrive through humor, even when times are toughest.

Crys Matthews, "How Many More"

One of the fundamental actions taken by anti-racist activists is saying the names of those who have died. Rising folk music star Matthews does this – simply, gently, with love and persistence. Nearly seventy names later, the message is clear.

In the hands of George Clinton, Prince, Sly Stone and D'Angelo, funk-grounded celebration has always been political. Memphis's own psychedelic bass master and Prince protégé, Dwayne Thomas Jr., carries on that legacy with a jam that insists, "Let's sing about revolution, to start a evolution."

Every protest is, in essence, a call that demands response. Observing social distance, 23-year-old Chicagoan Wyatt Waddell created his own choir on this track, raising a sound as big as a gospel choir in an exhortation that updates the sound of the Freedom Singers for the 21st century.

Morgan Harper Nichols, "One Breath At A Time"

Recognizing the need for comfort in times of upheaval, Christian musician, writer and artist Nichols tapped into the power of the psalms and hymns she loves, to acknowledge the desperate difficulty of carrying on in this time of crisis — and to offer a path forward.

Like many of history's cultural cataclysms, today's protest movement is a youth movement. At 16, the New Mexico singer-songwriter Nixon displays the conviction and openness of newly engaged political consciousness and offers some unassuming clarity.

Pure punk fury, from a man who's been through a few battles before. Connecting the losses of the HIV-AIDS epidemic to those felt today, the 59-year-old Mould starts with a scream and stays there as he and his band slam fundamentalism, hypocrisy and the empowered forces widening the gap between "us" and "them."

Marisa Anderson, "The Fire This Time"

With its name invoking James Baldwin, this subdued instrumental by this unclassifiable guitar master slowly reveals itself as a sonic account of breath ebbing in a body, intimately connecting with the death of George Floyd and the way oppression can kill, quickly or slowly.