Accessibility links
The 'Weekend Edition' Staff Who are the people who write the words and shape the sound you hear each weekend morning? Read about them. 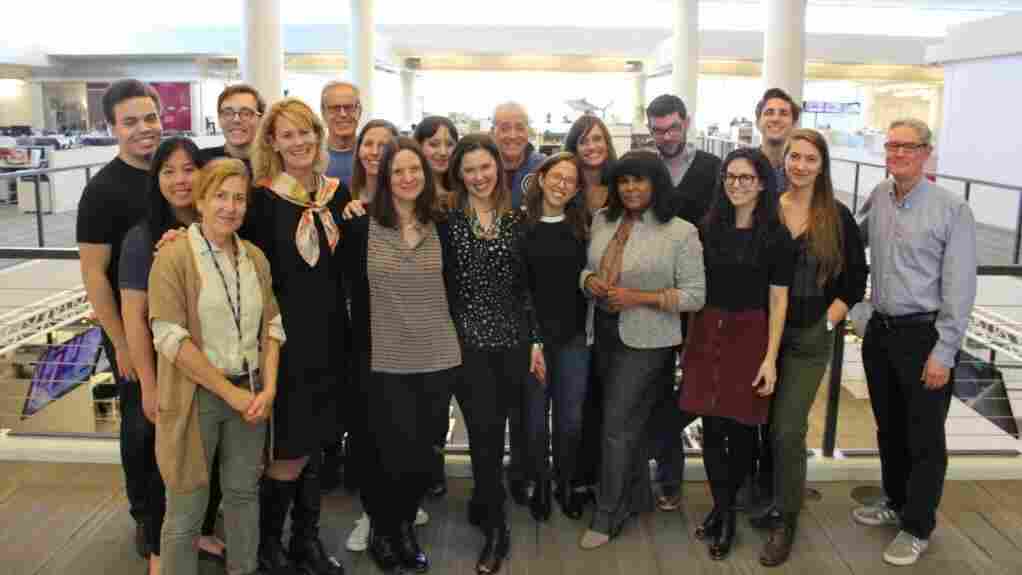 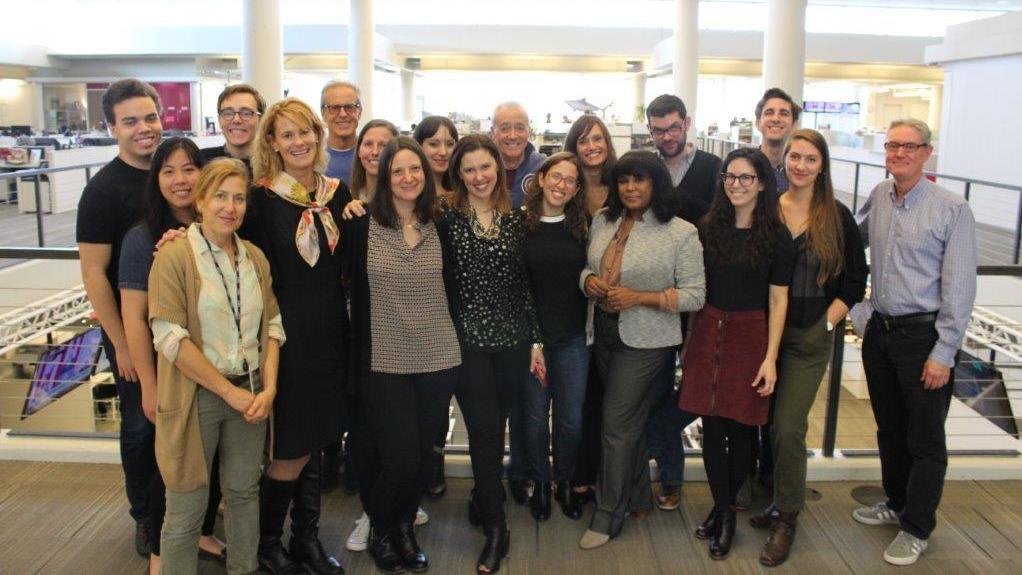 You've met the hosts of Weekend Edition — Scott Simon and Lulu Garcia-Navarro. Who else works on the show? Here are some brief bios:

Hiba Ahmad is a production assistant at Weekend Edition. She's also worked at Morning Edition and All Things Considered. She likes to find the human-centered stories to the world's biggest headlines, including a doctor battling the coronavirus in marginalized communities in New Orleans' ninth ward after it was destroyed by Hurricane Katrina, or a foster parent who has taken in a migrant child after he was separated from his parents at the U.S. southern border. Hiba studied broadcast journalism and religious studies at Virginia Commonwealth University. While there, she reported on the Black Lives Matter protests after the death of Freddie Gray and Philando Castile, and covered the 9th District Court of Appeals as they weighed the future of the Trump adminstration's travel ban. In what she likes to call her "free time," she is currently completing a masters of arts in Middle Eastern and Islamic Studies at George Mason University. Find her on Twitter at @hiba_ahmad96.

Hadeel al-Shalchi is an editor at Weekend Edition. Prior to joining NPR, Hadeel was a Middle East correspondent for the Associated Press and covered the Arab Spring from Tunisia, Bahrain, Egypt and Libya. In 2012, she joined Reuters as the Libya correspondent where she covered the country post-war and investigated the death of Ambassador Chris Stephens. To this day, she gets trolled on Twitter by conspiracy theorists about this topic. Hadeel also covered the front lines of Aleppo in 2012, but didn't tell her parents. Her reporting betrayed her, however – her mother knows Aleppo is not in Turkey, where she had claimed to be. Hadeel studied chemical engineering and computer science at the University of Ottawa and worked at a radiopharmaceutical company for a summer before realizing that was not her calling. She's lived in eight cities around the world and is happy to finally settle in D.C., even though she bemoans the sea of khakis. She is fluent in Arabic and can order a croissant in French.

Samantha Balaban is an associate producer. After receiving her M.A. in journalism and Latin American studies from New York University, she got her start in public radio covering the James "Whitey" Bulger trial for WBUR as an intern. Since coming to NPR as an intern in 2014, she has reported on a perfume-loving tiger, traveled to Mexico to meet actor Diego Luna (and cover the elections), ridden with border patrol officers along the Rio Grande River, eaten very well in Houston, interviewed a Bangle and used her waterproof fanny pack to help keep her mic dry during two hurricanes. She's also responsible for Picture This, a series of conversations with authors and illustrators. Most days, you can find her under a pile of books and mail coordinating Weekend Edition's book coverage. On weekends, she's hanging out with her dog, Winnie.

Sophia Alvarez Boyd is a production assistant. Sophia got her start in public radio as an intern at NPR's Latino USA and soon after landed an internship with NPR's education desk. That beat has influenced her story ideas for the show. Sophia also coordinates Weekend Edition's movie coverage – and when she has time, she dabbles in producing music interviews. Sophia grew up in the Washington, D.C., area but she also likes to call Madrid her second home. She tweets @sososophia16.

Andrew Craig is a journalist from Denver, Colorado. He loves to produce stories that inspire empathy and raise critical questions about our world. He began working for NPR in 2019, shortly after earning a master's degree from The Moody College of Communication at The University of Texas at Austin. He has since produced stories on a wide range of subjects, from remembrances for those we have lost to COVID-19 to a four-year-old singing about dinosaurs finding true love. Andrew is a proud alum of Yale University. His hobbies include learning, watching films, and exploring new places.

Peter Breslow is a senior producer for NPR. He has reported and produced from around the country and the world — from Mount Everest to the South Pole. During his career he has covered conflicts in nearly a dozen countries, had his microphone splattered with rattlesnake venom and played hockey underwater. For six years he was the supervising senior producer of Weekend Edition Saturday, managing that program's news coverage. Over the years, Peter has been honored with numerous awards including Overseas Press Club, DuPont-Columbia and two Peabody awards. A native of River Edge, N.J., Peter worships Muddy Waters, is a graduate of the University of Massachusetts and is an Eagle Scout.

Melissa Gray is a senior producer for Weekend Edition. Melissa got her start at NPR Member station WUGA in Athens, Ga., before reporting on arts and cultural stories for Peach State Public Radio in Atlanta. She's worked all over NPR since 1999, including at Morning Edition and All Things Considered. Her determination to "learn how to really bake a damn good cake" led her to experiment on her co-workers. You can read all about it in her cookbook, All Cakes Considered. Melissa lives by this motto: "We have to make our own fun. Nobody else will make it for us."

Denise Guerra is a producer and social media manager. She studied communication theory at UCLA, and can probably read your body language. She went on to work as a community liaison with the city of Los Angeles on transportation, housing and bridge projects where she honed the craft of listening to underserved communities. Her first radio job was at Marketplace. She then worked for KPCC in its news division and for the morning show Take Two. She also worked as an adjunct professor at the USC Annenberg School for Communication and Journalism where she graduated with an M.A. in journalism. During her time at NPR, she's worked on group bookings for Michel Martin's "Barbershop" series and a series on generational divides. She's done programming on the road from Detroit and Wisconsin. Her favorite productions include interviews with Mavis Staples and the rapper Bambu, and award-winning stories on #MeToo and an Iraqi dancer's life that was cut short. She's always looking to get a new point of view, so she has taken on skydiving and climbing the world's tallest peaks.

Barrie Hardymon is the senior editor at Weekend Edition, and the lead editor for books. You can hear her on the radio talking about everything from Middlemarch to middle grade novels, and she's also a frequent panelist on the NPR podcasts It's Been a Minute and Pop Culture Happy Hour. She went to Juilliard to study viola, ended up working as a cashier at the Strand, and finally got a degree from Johns Hopkins' Writing Seminars, which qualified her solely for work in public radio. She lives and reads in Washington, D.C..

Danny Hensel is a production assistant. He got his start in public radio producing on the Michigan Radio magazine show Stateside. Since moving to D.C. to intern at NPR, he's worked at Morning Edition, All Things Considered and It's Been a Minute, producing interviews with Greta Thunberg, Renée Zellweger, Elisabeth Moss, Igor Levit and Roy Wood Jr., as well as a series on hobbies. A Chicago area native, Danny is a proud (perhaps too proud?) graduate of the University of Michigan. As you read this, he's probably watching a movie and tweeting about it at @dannyhensel.

Ed McNulty began his newsroom career as editorial assistant to Daniel Schorr, NPR Senior News Analyst and one of the few remaining "Murrow Boys" of CBS News fame. McNulty was a member of the Weekend Edition staff during the loss of the space shuttle Columbia, the Sept. 11 attacks and the invasions of Afghanistan and Iraq. In 2004, he left NPR to help launch The Bob Edwards Show on satellite radio and stayed with the program through its 10-year run. He was the show's executive producer when it was honored with a Robert F. Kennedy journalism award. Since returning to NPR, Ed has served as an editor on All Things Considered, the Washington Desk, the National Desk, Morning Edition and Weekend Edition.

Sarah Lucy Oliver is the executive producer. Each week she is responsible for sorting through producer, editor and desk pitches and making sure there's some joy in every show. Sarah joined Weekend Edition as an intern in 1989 and came back to be veteran journalist Daniel Schorr's assistant. She has been with Weekend Edition ever since. In her two decades at the show, Sarah has held a variety of roles and produced a broad range of stories, her personal favorites being pieces on the Sept. 11 attacks, Major League Baseball's Grapefruit League in Florida, the gravesite of Stonewall Jackson's arm, and interviews with all sorts of luminaries including President Carter, Patti Smith and Mr. Rogers.

D. Parvaz is an editor at Weekend Edition. Prior to joining NPR, she worked at several news organizations covering wildfires, riots, earthquakes, a nuclear meltdown, elections, political upheaval and refugee crises in several countries. She got her start in journalism in Tokyo, where she worked as a copy editor on the international desk of a daily newspaper. She went on to work in several U.S. newsrooms, including the Seattle Post-Intelligencer, for which she reported on everything from Burning Man to breaking news, and ThinkProgress, where she covered trade, diplomacy and nuclear issues. Prior to that, D. was a senior producer and editor at Al Jazeera, where she reported on conflict, democracy and human rights for seven years. She's covered a lot of ground – reporting on the fight for press freedoms in post-Gadhafi Libya, elections in Afghanistan and the effort to save Yazidi girls from ISIS in Iraq. Born in Iran, D. was raised in Tehran, Dubai and Vancouver.

Ian Stewart (pronounced "yahn") is a producer. Since he came to NPR in 2014, he's followed presidential candidates around his home state (Iowa), reported on emergency food banks in D.C., 'silent canvassing' in Milwaukee, the impact of climate change on Miami's most vulnerable and his pandemic road trip, and he once managed to get dragon sound effects on the air. He created the show's 'signature song' and music starter kit series. He also line produces the show and has directed special coverage of elections, confirmation hearings and an impeachment trial. After studying architecture and politics at Middlebury College, he interned at All Things Considered. On his weekends, he's either doing yard work or doing research for his ranking of fried potatoes (current order: Curly, Waffle, French, Shoestring, Wedge).

Ned Wharton is a senior producer and has been with Weekend Edition since 1989. Ned produces many of the artist features heard on the program, including signature conversations with Baltimore Symphony Music Director Marin Alsop. He has produced news features from the field, including a trip to Egypt for a series on climate change, reports from Louisiana after Hurricane Katrina and reports on the economy and culture of Michigan's Upper Peninsula. Before NPR, Ned worked as a classical announcer at WNYC in New York, where he created and hosted the music show Mixdown. Beyond radio, Ned has worked as a record producer. His credits include the New York band Songs from a Random House and Singers, Songs & Sessions, a collection of live performances recorded in NPR's Performance Studio. He tweets @NPRNedWharton.