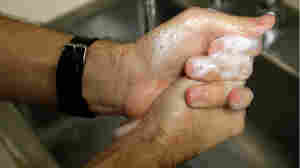 Studies show that only about 40 percent of health care workers in the U.S. wash their hands as often as they should. Rob Carr/AP hide caption

January 30, 2010 • Studies show only about 40 percent of health care workers in the U.S. wash their hands as often as they should. So some hospitals are trying to monitor just how regularly their employees are washing up — by testing out new surveillance technologies.

'Reconciliation' May Not Save Democrats' Health Bill

January 30, 2010 • Democrats trying to salvage their health care legislation have been talking a lot about "reconciliation." It's basically a way to alter laws without the threat of a Senate filibuster. But reconciliation wasn't designed as a vehicle for controversial policy change, and it's no silver bullet. Host Guy Raz gets a reconciliation primer from Sarah Binder, a senior fellow at the Brookings Institution.

'Reconciliation' May Not Save Democrats' Health Bill

Bipartisanship In Washington: Can It Really Be Achieved?

January 29, 2010 • In his first State of the Union address, President Obama called on lawmakers to jettison partisanship and work for the common good. But can Congress meet in the middle on issues like the economy and health care when the principles at stake are so contentious? Host Michel Martin talks to two Congressmen, from both sides of the aisle --Rep. Jim Himes, a Democrat from Connecticut,and Rep. Scott Garrett, a Republican from New Jersey.

Bipartisanship In Washington: Can It Really Be Achieved? 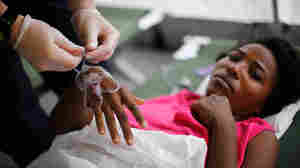 January 29, 2010 • Victims of Haiti's earthquake still need urgent medical care. But once broken bones are set and amputations completed, patients will need longer-term help. Haiti's next challenge: How to house and care for those recovering from life-changing injuries.

January 28, 2010 • House Education and Labor Committee Chairman George Miller says Congress will pass health overhaul legislation this year even though Democratic leaders are increasingly focusing on the economy and jobs.

January 28, 2010 • President Obama gave his first State of the Union address Wednesday night. Ever year, Morning Edition checks some of the facts to find out more about what the president said in his speech. Steve Inskeep talks to: NPR's David Welna on the budget, NPR's Julie Rovner on health care, NPR's Christopher Joyce on nuclear plants, NPR's Jackie Northam on the Afghan war; and NPR's Mary Louise Kelly on the Iraq war.

January 26, 2010 • President Obama's plan to overhaul the nation's health care system hangs in the balance. Uwe Reinhardt, professor of economics and public affairs at Princeton University, says it won't make much difference to most Americans if the legislation dies. But Gail Wilensky, a health care economist who served in the administration of President George H.W. Bush, says she believes there needs to be an overhaul of the system because the soaring costs are unsustainable.

January 26, 2010 • Republicans have some ideas for how their stalled health overhaul can get started again: Find some bipartisanship. The problem is that most Republicans don't agree on many of the proposals fellow party members are shopping around Capitol Hill.

January 24, 2010 • As Congress works out differences in the House and Senate health care bills, one particular proposal is drawing fire from the California delegation. The bills would allow insurers to sell some policies across state lines for the first time, and critics contend that could weaken consumer protection laws in states like California that aggressively regulate the insurance industry.

Many Still Hope For Insurance Reform

January 22, 2010 • Some lawmakers are considering a scaled-back health bill in place of the comprehensive legislation now stalled in Congress. But there's debate about whether popular insurance reforms, such as requiring insurers to accept applicants with health problems, can be successful without an unpopular individual insurance mandate.

January 22, 2010 • One of the biggest sticking points with the plan to overhaul health care has been how to pay for it. The Senate wants to impose a so-called "Cadillac Tax." That is, a tax on the most expensive health care plans. Economists say in the long run the tax would result in companies offering less expensive health plans. The money the company saves would then translate into higher wages.

January 22, 2010 • The House is not about to pass the Senate's version of the health care overhaul bill. And so far, the idea of scaling back and reaching out to Republicans doesn't seem likely to pay off. So lawmakers are now scrambling for a new strategy after nearly a year of intense work on a massive piece of legislation.

How The Budget Reconciliation Process Works

January 21, 2010 • Democrats, who no longer have a filibuster-proof majority in the Senate, are weighing the use of a budget rule called reconciliation to pass at least part of the long-debated health overhaul package with a simple majority.

January 21, 2010 • Democrats are weighing their options for passing a health care bill in the wake of Republican Scott Brown's upset win on Tuesday in the Massachusetts Senate race. Some Republicans argue that efforts to overhaul health care are dead. NPR's Ron Elving and Julie Rovner weigh in on what lies ahead for health care.

January 21, 2010 • The Democrats' health overhaul legislation is in trouble for many reasons, including key policy decisions that led many Americans to wonder whether they would wind up worse off.