In an unconventional holiday tale set in a kingdom two hundred years in the past, ten-year-old Benjamin, a mute autistic savant, is commissioned to paint a nativity scene for midnight mass and meets a talented pig who helps him to find his voice.

by Karen Ehrhardt and Robert Roth

Presents an introduction to jazz music and provides brief facts about nine well-known jazz musicians, set to the rhythm of the traditional song, "This Old Man."

G Is for One Gzonk!

In a celebration of letters, imaginative creatures are introduced for each letter of the alphabet, but before long, a group of numbers crash the story and try to carry out their plans to turn the text into a counting book. 200,000 first printing. $200,000 ad/promo.

by Mike Reiss and David Catrow

Since every day—with the exception of one —is Christmas, Noelle, who lives in Christmas City, prepares to celebrate the exciting, yet lesser known holiday called Un-Christmas Day!

Journey to the Blue Moon

In Which Time Is Lost And Then Found Again

After losing his grandfather's pocket watch, Alex journeys to the Blue Moon, a place where earthlings search for lost items, where he meets a vast array of eccentric characters, some good and some bad, and gains a new perspective on the concept of time.

The Legend of Hong Kil Dong

The Robin Hood of Korea

Although his father is a minister, Hong Kil Dong cannot work for the government because his mother is a commoner, and he decides instead to use his training and magic powers to help the oppressed peasants.

The Boy Who Was Caught Up in a War

by Kathy Henderson and Jane Ray

Presents an ancient Sumerian tale about the youngest and weakest of eight brothers who, caught up in an ill-advised war, uses his wits and courage and eventually becomes king. 10,000 first printing. Jr Lib Guild.

When Leo Caraway, president of the Young Republicans Club, gets his scholarship to Harvard taken away, he turns to his real father, a lead singer in a punk rock band whom Leo has just recently learned is his father, in hopes that dad will pay for his tuition, but Leo's summer job as the band's roadie teaches him a lot about his dad, his friends, and himself.

When she is tricked by her stepfather and sold into prostitution, thirteen-year-old Lakshmi becomes submerged in a nightmare where her only comfort is the friendship she forms with the other girls, which helps her survive—and eventually escape. Reader's Guide available.

When Maud is chosen by the seemingly sweet Miss Hyacinth and her sister, she, excited to leave the orphanage, finds her new home a place of corruption and cruelty when she is forced to help stage elaborate seances to swindle wealthy patrons out of their money. 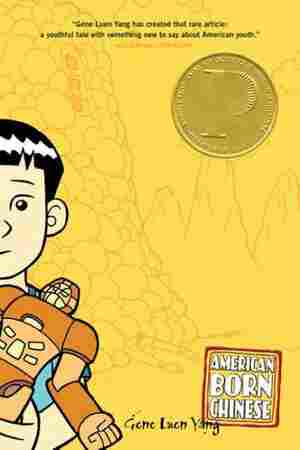 Graphic novelist Gene Luen Yang's funny and sensitive drawings weave together the stories of Jin Wang, a Chinese-American kid who just wants to fit in at his new school; basketball player Danny, whose life is bedeviled by his stereotypical cousin Chin-Kee; and the mythical Monkey King, whose desire to become a god gets him in rather a lot of trouble.

Relates the life experiences, from birth to beginning boarding school, of a boy growing up on a rubber plantation in rural Malaysia.

Chowder the bulldog has never fit in with the other neighborhood canines, but he sees a chance to make friends with the animals at the local petting zoo.

While on trial as an accomplice to a murder, sixteen-year-old Steve Harmon records his experiences in prison and in the courtroom in the form of a film script as he tries to come to terms with the course his life has taken. A Coretta Scott King Honor Book. Reprint. 50,000 first printing.

Told in free verse and set against a background of street gangs and poverty in Harlem, this powerful novel follows seventeen-year-old African American Damien as he takes a bold step to ensure that he and his new love, Junice, will be together—forever.

While presiding over a rape case, Judge George Mason questions his professional abilities and the law itself.

Stewart Dubinsky plunges into the mystery of his family's secret history when he discovers his deceased father's wartime letters to his former fiancâee, revealing his court-martial and imprisonment during World War II.

The Hounds And the Fury

Sister Jane, the local Master of the Hunt, and her animal companions take on a feisty, wheelchair-bound bookkeeper, Sister Jane's boyfriend, and a wealthy former hunt club donor as they set out to uncover the mystery of some missing money and a missing body. 50,000 first printing.

Traveling to the Saddlebred show in Shelbyville, Kentucky, Harry and Fair Haristeen stumble into the midst of a crime wave when their hosts are robbed on the day they arrive, a valuable mare is stolen, and a groom is found murdered.

After the Gold Rush

Prophetic poet Walt Whitman presides over each interlinked episode in a visionary novel set in the city of New York, featuring the same group of characters—a young boy, an older man, and a young woman.

The epic saga of three generations of an American family follows the Stassos family through periods of ambition, love, violence, and change, focusing on the turbulent lives of the Stassos children

A Home At The End Of The World

In a novel of love, family inheritance, and desperation, the author offers a fictional account of Virginia Woolf's last days and her friendship with a poet living in his mother's shadow.

A descendant of royalty and one of the largest landowners in Hawaii, Matthew King struggles to deal with his out-of-control daughters—ten-year-old Scottie and seventeen-year-old Alex—as well as his comatose wife, whom they are about to remove from life support.

In a series of tales featuring complex upper-class Hawaiian families, a single mother's discovery of an adult magazine in her teenage son's room prompts a spiral of jealousy, a man struggles to understand his wife's abandonment, and a son is disillusioned by his father's emotional detachment. A first collection. 25,000 first printing.

In 1869 Japan, a young woman escapes the confines of her arranged marriage by painting memories of her lover and secretly wrapping the painting around a ceramic pot bound for Europe, where it falls into the hands of a disenchanted young man, in the story of how the lives of four very different characters are transformed by the painting. A first novel.

The View from Castle Rock

An evocative and compelling compilation of short fiction by the award-winning author of The Love of a Good Woman and other works journeys from the Scotland of the author's own family heritage and a ship en route to the New World, to a family odyssey from Illinois to Canada and in and around Lake Huron. 150,000 first printing.

The Astonishing Life of Octavian Nothing, Traitor to the Nation

Various diaries, letters, and other manuscripts chronicle the experiences of Octavian, a young African American, from birth to age sixteen, as he is brought up as part of a science experiment in the years leading up to and during the Revolutionary War.

In a future where most people have computer implants in their heads to control their environment, Titus meets Violet, an unusual teenage girl who is in serious trouble. By the author of Burger Wuss.

by Blue Balliett and Brett Helquist

When the Robie House is marked for demolition, Petra, Calder, and Tommy take action to save the historic landmark, yet ghostly sounds and moving shadows from within make the three friends think that there may be something strange about the special house and so begin to gather additional evidence with their sleuthing skills. 175,000 first printing.

by Blue Balliett and Brett Helquist

When strange and seemingly unrelated events start to happen and a precious Vermeer painting disappears, eleven-year-olds Petra and Calder combine their talents to solve an international art scandal.